Finally–the hot weather is here! With the ambient temperature already heated, it’s easy to work up a sweat when you exercise during the summer. Heck, just the exertion of your warm up could get a good sweat going. When it’s streaming from every pore in your body at the end of your workout, you may be inclined to think that you burned a ton of calories. It’s true that your body expends extra energy to keep itself cool, so exercising in warm temperatures can result in extra calorie burn, but it may not be as much as you think.

It’s a Matter of Perception 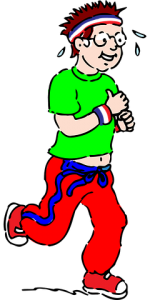 Don’t back off the intensity just because you’re sweating–push just as hard as ever to burn extra calories.

Getting a good sweat during a summer workout increases perceived effort, but decreases your performance, according to the American Council on Exercise. Apparently, when you’re sweating a lot, you think you’re really working hard, so you don’t put as much effort into your workout. However, people tend to have more endurance in warmer temperatures, so they can work out longer. Whether it’s because they aren’t putting their all into exercising, or they are more comfortable in a warmer environment, understanding that and staying mindful of it can work to your advantage. ACE also reviewed research on exercising in different temperatures, and the results of two studies found that working out in warmer temperatures is best for burning fat and more calories in general. Just don’t let your mind play tricks and fool you into backing off the intensity. Go for the burn and use the increased endurance you get in warmer temps to claim those extra calories you thought you were burning all along. 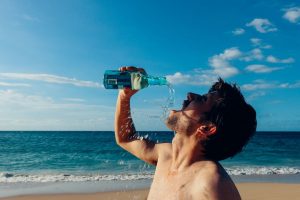 Drink water throughout the day as well as extra during your workout to stay hydrated and keep your body burning calories.

So, yes, a hot summer workout can burn more calories, but you have to be careful to stay hydrated. Not doing so puts your health at risk and actually shuts down calorie burning. A study published in the European Journal of Clinical Nutrition found that not providing the body with enough water slowed the metabolism and impaired insulin sensitivity, two issues that make it harder to lose weight. If you’re confident you’re drinking enough water throughout the day and during your workout, you might want to think again. Shape magazine reveals that just being in a warmer climate can cause a person to sweat out between 2 and 3 liters of fluid each hour–add that to the extra water you lose during an intense workout and there’s part of the answer to why you exercise really hard but can’t seem to lose weight. 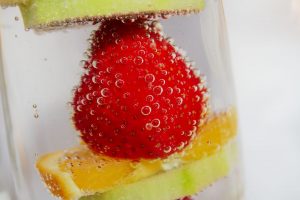 Water bottles with infusing baskets let you make refreshing flavored water that can contain up to 20% of the vitamin content of the fruit you’re using without adding calories.

The solution is simple: drink more water. Fill a gallon jug or pitcher with water each morning and keep it close by to remind you to drink during the day. Take a large water bottle along when you work out and drink 6 to 8 ounces about every 15 to 20 minutes while you’re exercising, then consume another 16 ounces when you’re done to replenish. If you’re fond of sports drinks, consider drinking them in addition to rather than instead of water during a workout. The electrolytes they provide are useful, but many of those drinks are calorie-heavy and can cancel out some of the extra calories you’re trying to burn. Water is always a great choice because it’s thirst-quenching, has zero calories, and is just what your body is craving. Miss the flavor of fruit juice or your favorite sport drink? Get a sports bottle with an infusing basket and flavor the water with fruit slices, cucumber, basil, or mint for a refreshing calorie-free treat.