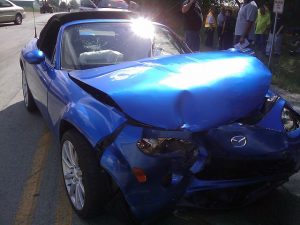 Even a trauma like an automobile accident
can cause PTSD.

Everyone deals with anxiety and stress to some extent. According to the Anxiety and Depression Association of America (the ADAA), anxiety disorders affect 40 million U.S. adults. Post Traumatic Stress Disorder is a specific type of anxiety disorder that results from trauma, either from witnessing or experiencing it. PTSD is most often associated with military veterans but, while the prevalence of the disorder among veterans is between 13 and 31 percent, it’s not a disorder that discriminates. The U.S. Department of Veterans Affairs says that 5.2 million adults in general — military and civilians alike — suffer from Post Traumatic Stress Disorder each year, and 7 to 8 percent of the population will have PTSD in their lifetime.

Whether or not you can get over PTSD hasn’t been conclusively proven. Some deal with PTSD symptoms more effectively than others and may appear cured, but doctors Kim, Kravits and Schneider from the University of New Mexico say there is no cure and the best course of action is an ongoing challenge to treat Post Traumatic Stress Disorder and manage PTSD symptoms. It may sound simplistic to tout the benefits of exercise to include treating stress, anxiety and PTSD, but it’s been proven that exercise really can help someone with PTSD syndrome.

The Gym is Therapeutic

“The gym has always been my therapy,” says Randy, a veteran who was stationed in Afghanistan. “Even before I was in the military, I used working out to release tension and stress. I always feel better after I’ve hit the gym.” 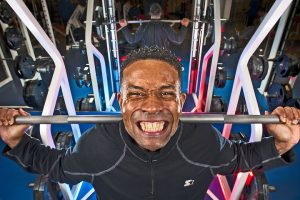 Exerting energy for a workout relieves stress and floods your system with endorphins.

One of the reasons exercise helps Randy, other veterans, and those with PTSD is because it releases stress-combating endorphins into the system, relieving anxiety and tension and promoting positive feelings. The ADAA says that studies are even showing that regular exercise is as effective as medication for some people. The benefits of exercise for PTSD symptoms have proven so effective that professionals and official organizations recommend regular exercise to treat Post Traumatic Stress Disorder. 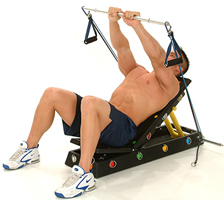 When your mind is on your workout and counting reps, you won’t have time to dwell on anxiety-ridden thoughts.

In his book on PTSD, Dr. Mark Goulston lists the many different ways exercise will help someone with PTSD. First, exercise distracts you. When your mind is on counting reps, following the exercise class instructor, or maintaining your speed and heart rate while on the elliptical or treadmill, it won’t be dwelling on anxiety-ridden thoughts. Also, exercising gives you a sense of control over your time, your body, and your life. That’s a terrific plus that counters the helpless feelings that are one of the many PTSD symptoms.

In addition to calming anxious, stressful thoughts and giving you back control over your life, exercise addresses other PTSD symptoms. Post Traumatic Stress Disorder often leads to problems with weight control. PTSD can result in high blood pressure and increased risk of heart disease. Depression and insomnia are other PTSD symptoms. Exercise helps combat all of these, lowering your blood pressure, helping with weight control, improving your cardiovascular health, and helping you sleep easier, better, and more soundly. Additionally, exercise decreases depression and improves memory and brain function. 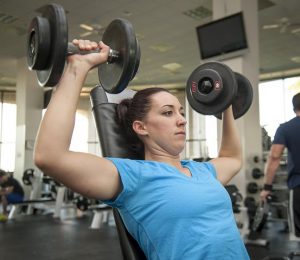 Breathe out each time you exert in an exercise to avoid injury and eliminate the chances of hyperventilating.

It’s always wise to consult your doctor before starting a new exercise program. Aside from that, if there’s one caveat to using exercise to combat any stress disorder, it would be the importance of proper breathing. It’s essential to remember to breathe under any circumstances when working out, but it’s especially vital for those with PTSD or other anxiety disorders. That’s because improper breathing during exercise can cause hyperventilation which may lead to a panic attack.

Stew Smith of Military.com explains that, if running is your exercise of choice, you can use your steps to breathe in a 3:2 ratio, breathing in for three steps, then breathing out for two steps. Proper breathing during resistance training is a lot easier to manage. Inhale prior to the exertion part of an exercise and exhale with the exertion. Proper breathing prevents potential internal injury such as blood vessel strain or hernia in addition to keeping hyperventilation and panic attacks at bay. Plus, deep breathing from the diaphragm is yet another technique for treating Post Traumatic Stress Disorder.

Whether you’re combating PTSD or something less traumatic is stressing you out, it’s worth it to give exercise a try. If, aside from alleviating PTSD symptoms, you lose some weight and improve your mood and health, those are far better side effects than you’ll get with any medication.