We’ve discussed how exercise is an effective approach to anti-aging, but the focus in the past was mostly on looking and feeling young and retaining balance and overall health. While some may be of the opinion that they don’t care about mental decline as long as they look fabulous, a recent article in Prevention Magazine1 outlined a surprise anti-aging benefit of working out to keep you forever young. 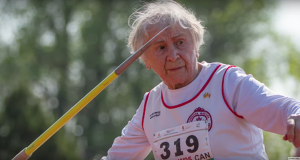 Researchers believe that staying extremely physically active was the key to Olga’s mental acuity well into her 90’s. Image via BBC News/YouTube

Timothy Gower’s article in Prevention introduces readers to Olga Kotelko, who lived to the impressive age of 95, and details the research she inspired and helped to advance. It wasn’t Olga’s longevity that sparked neuroscientists’ curiosity, but her extremely sharp mind. Right up until she passed away, Kotelko’s cognition was far better than other adults in the 90 to 95 age range, based on speed and memory tests. Additionally, an MRI scan showed that physically, though not perfect, her brain had fewer irregularities and aberrations than others her age. One neuroscientist quipped that if she were to guess Olga’s age based on her MRI, she would have thought her to be almost 30 years younger.

So what was Olga’s secret? The single thing that she did differently than the majority of nonagenarians was to be physically active. Olga didn’t just stroll around the mall, though. She excelled in track and field, and it wasn’t just that she gave the events a good go. Olga Kotelko won 750 (!) gold medals and set almost 40 world records in long jump, javelin throw, sprinting, and other events–and it was all accomplished in the years after she turned 77 and before she passed away at 95, proving that it doesn’t matter how old you are when you start, just as long as you do start! 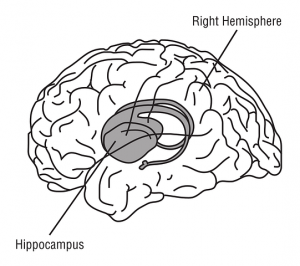 Grow your brain while you grow your muscles–exercise has been shown to enhance growth factors that increase gray matter in the memory center of the brain.

Lest you rush to the assumption that Olga was just lucky, or had good genes, researchers have studied thousands of seniors and found that Kotelko’s results in staying mentally sharp can be duplicated by anyone who is inclined to make the effort. When the aerobic activity, physical activity, and brain activity was measured in adults between the ages of 60 and 80, the ones who were most physically active showed patterns linked to improved cognitive function. Specifically, their brains were more oxygenated, and their patterns of brain activity were better.

In fact, based on specific studies, researchers believe that, just like muscles, brains benefit from exercise because it increases oxygen and blood flow and reduces stress through increased endorphins and levels of norepinephrine. What’s more, a 2019 study linked exercise with memory activation. One of the most significant responses in the brain to exercise, however, is an increase in growth factors that actually support the creation of new nerve cells and improve cognitive agility. Further, research published in Scientific Reports found that people who work out regularly have more gray matter in the memory centers of their brains, the hippocampal region. Considering that there was a time when it was believed that there was nothing that could be done once neurons died, that revelation is huge. 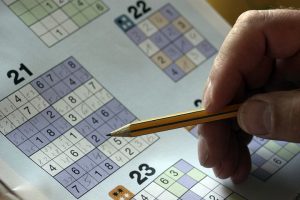 Brain teasers are useful for improving cognitive function in your later years, but experts say that exercise is even more important.

The evidence for exercise being just as good for the brain as it is for the body is so overwhelming that doctors from psychiatrists to neuroscientists are recommending working out as a very real way to not just stop aging in the brain but to reverse it and even avoid dementia. Psychiatrist Dr. Gary Small developed a protocol for a 14-day program, detailed in his book “2 Weeks to a Younger Brain,” co-written with Gigi Vorgan. Though Dr. Small confirms that puzzles and brain-teaser games are useful, he says that working out is more effective because of the physical effects it has on the brain. Other doctors, including Washington University in St. Louis professor of psychology Dr. Mark McDaniel say that you’ll get the best results from engaging in both resistance training and cardio exercise. 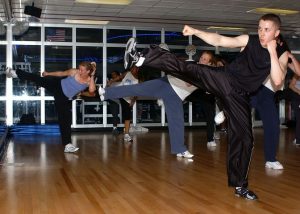 Whatever your basic exercise routine, add something new like kickboxing or intervals for an element of challenge that will maximize brain benefits from working out.

Challenge is the key that optimizes the benefits of exercise to improve brain function, restore memory, and reverse the aging process. That doesn’t mean you should dive right in to signing up for a triathlon or biking across the country. Instead, suggestions from health and fitness professionals center around simply tweaking routines. Take a fitness class you’ve never participated in before to learn new routines and skills. Walk or jog a different route every month, maybe one that is rocky, uneven, or uphill, or add in some intervals. Even if you’re already accomplished at your favorite sport such as weight lifting or tennis, sign on with a trainer now and then to learn new techniques and exercises–or try something different like golf, rock climbing or kick boxing. Any physical activity that also requires you to learn something new increases communication in different parts of the brain, which just adds to the benefits your brain is already reaping from exercise.