Last 10 pounds have you stumped? Don’t give up yet!

Applause, applause for everyone who stuck with their New Year’s Resolution and is working out and watching what they eat. According to Statistic Brain, you are in an elite group considering that almost 60 percent of people who make resolutions crap out after only one month. So, if you’re hanging in there almost 6 months later, good for you! You’ve likely seen some terrific results by now, even if you haven’t reached your ultimate goal. Don’t let that small detail convince you to quit now. If you’re down to your last 10 or 15 pounds of weight loss and have plateaued, here are some tricks you can try to move forward and hit your target. 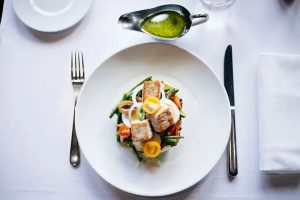 Little adjustments such as eating smaller meals and/or eating more frequently throughout the day can get your metabolism burning again.

Nobody likes the word diet, so let’s say “eating plan” instead. If you’ve found an eating plan you can live with and even like, you might be loathe to make changes, but adjusting a few things about how you eat could be just what you need to lose a bit more weight. Prevention interviewed four women who successfully took off their last 10 pounds, and all of them did it by making small changes to their eating plans, such as putting more protein into your meals. Whatever changes you make, stick to eating the same amount of calories. That could mean cutting back a bit on other food groups. Another suggestion is simply to eat smaller portions of the exact same foods you make for the rest of the family. See? No need to plan for special foods or additional meals. Nothing earth-shattering.

Web MD recommends fiddling with the number of meals you eat, such as dividing your daily calories out over three meals and two snacks if you’re used to only eating three times a day. Bodybuilding.com says to eat homemade more often, and that might be the one tip that finally does the trick. According to the Orlando Sentinel, over half of U.S. adults eat out or takeaway orders three times a week or more, and eating even just one restaurant meal each day can make your weight go up by 2 pounds in a year. If you must eat out while you’re trying to lose weight, at least make healthy choices. Pick the leanest foods on the menu and commit to taking home half of the portion you’re served, instead of cleaning your plate. 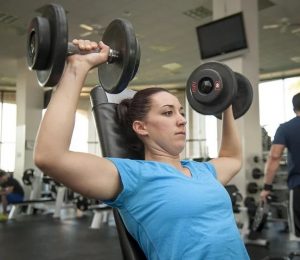 If you aren’t already resistance training, give it a try. If you are, change up your routine to push your body back into fat burning mode.

Here’s the thing: you’ll get better weight loss results if you combine a healthy eating plan with exercise. Like it or not, them’s just the facts. So! If you’ve been trying to take it all off with diet alone, add a workout into the mix to jumpstart your metabolism. If you’re already working out, then changing up your routine will get your metabolism going again to finish off the final 10. Try a new workout and increase the intensity. You’ve heard us harping on HIIT for sometime now, but that’s only because it works. Switching to High Intensity Interval Training will give you more bang for your workout buck when you not only perform different exercises than you’re used to doing, but you do them with increased intensity in a format that’s been proven to kick your metabolism up a few notches and keep it burning for hours after you’re finished working out.

Does it all sound too simple? Good. That means it’s doable. With a tweak here and an adjustment there, you can get rid of the last 10 pounds to hit your weight loss goal!