Having been around since 1960, gastric bypass surgery is not a new procedure. Over the past decade, give or take a few years, the procedure has seen a resurgence in popularity. A gastric bypass might sound like an easy way to lose weight quickly, especially for those who think they have tried every available solution. However, going through gastric bypass surgery is not as simple as it might sound. Your eating habits will change, and your doctor will want you to exercise to maintain your weight loss and keep you healthy. Considering those are changes you can make without going under the knife, gastric bypass should be a last-resort decision.

The Mechanics of Gastric Bypass Surgery 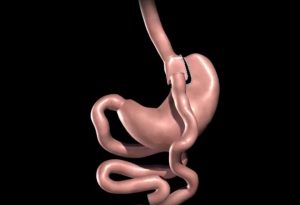 Gastric bypass surgery blocks off most of your stomach, leaving you able to only eat 4 ounces at a time at most. Image via HCA East Florida/YouTube

The normal size of an adult human’s stomach is roughly the size of a football but, in general, it varies from person to person. Overeaters stretch their stomachs, and when you fast or reduce your food intake it can shrink, too. When your stomach gets stretched to oversize, it takes more food to make you feel full, leading to consistent overeating, weight gain, and obesity. According to Prevention, when you undergo gastric bypass surgery, the majority of your stomach is blocked off–bypassed–leaving you with a “new” stomach that is only the size of your thumb. The doctor creates a small, dime-sized hole in the new stomach and attaches your intestine to it. 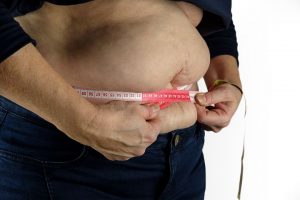 There are people whose metabolisms have turned on them, making it nearly impossible to maintain a healthy weight no matter what they do, but just being overweight does not make you a candidate for gastric bypass surgery. Only those who are 100 pounds or more overweight are typically recommended for the procedure. While the National Institute of Diabetes and Digestive and Kidney Disease says that over one-third of adults meet that requirement, that leaves it up to the other two-thirds of adults to manage their own weight-loss. Additionally, your doctor will have to verify that you have given diets and other weight loss therapies an honest try–for 3 to 6 months or more each time–with no success. You will also have to go through counseling that will paint a detailed picture of what life after gastric bypass surgery will be like.

Gastric bypass is no out-patient procedure. You may end up staying in the hospital as long as 5 days. As with any major surgery, there are a number of risks involved. MedlinePlus lists some of those to be 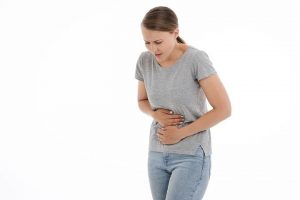 Complications can cause stomach pain after gastric bypass surgery.

Some patients experience stomach pain after gastric bypass surgery when ulcers develop on the new seams in their stomachs. Pain can also be caused by intestinal hernias that are created if portions of the bowel get caught on seams created on the abdominal wall by the surgery.

Also, you are likely to wake up with a whole new attitude toward food. That might sound like a plus, but your new feelings and reactions to food will be extreme. Some patients have reported that just the thought of what were previously favorite foods such as steak, pastries, or dairy products made them physically ill after gastric bypass surgery. You may not be able to eat any food at all within the first few days. Consider it a feast if you can manage to get 2 ounces of cooked cereal down without it coming back up.

There are some serious risks, too: life-threatening complications and even death. According to Prevention, the University of Minnesota reviewed research on 22,000 patients who had gastric bypass surgery. The findings showed that 3 percent experienced significant complications such as blood clots, internal bleeding, and intestinal leaks. Additionally, 1 in every 200 patients died within 30 days of having surgery.

You will eventually be able to eat after gastric bypass surgery, and your new stomach may even stretch enough to hold up to 4 ounces. However, you will have to get used to taking tiny bites and chewing them slowly and thoroughly, a technique that everyone, even people who haven’t undergone the surgery, can benefit from. You will not be able to take a bite of food and immediately gulp down a drink; solids and liquids have to be separated. You may have to get used to eating several smaller meals throughout the day rather than the big three you are used to but, again, that is a strategy that is effective for everyone regardless of their physical condition or weight loss goals. 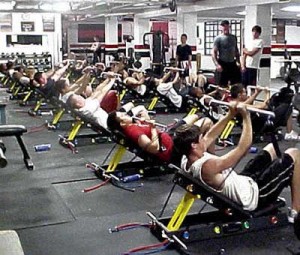 Exercise on your own or join a gym–you will have to start working out to maintain the weight loss surgery initiates.

In addition to your new eating regimen, your doctor will recommend exercise. Many people report having more energy once they start losing the excess weight, so exercising should not present a problem. Though you will lose weight seemingly effortlessly at first , if you don’t exercise after a gastric bypass, you will gain back a high percentage of the pounds you initially lose. Within the first few years, most patients gradually gain back up to 25 percent of what they lose. Plus, Prevention says that after 5 years, 85 percent of those who have had the surgery gain back up to half of their initial loss, and the remaining 15 percent of patients regain more than half.

There are numerous people who have had gastric bypass surgery, and some are happy they did it. Yet, even the satisfied customers will tell you that the tradeoff for a slimmer, healthier body is a new lifestyle that was tought to adjust to. Since you will have to alter your lifestyle anyway, why not give diet and exercise one last chance before you take the gastric bypass plunge? It is a healthier alternative that will not present the complications and dangers that surgery does. And stay tuned for your bonus. Next week’s post will explain a non-surgical technique that tricks your body into thinking you have had gastric bypass surgery.