This week, Targitfit is pleased to bring you an informative article by Carnivore Aurelius: 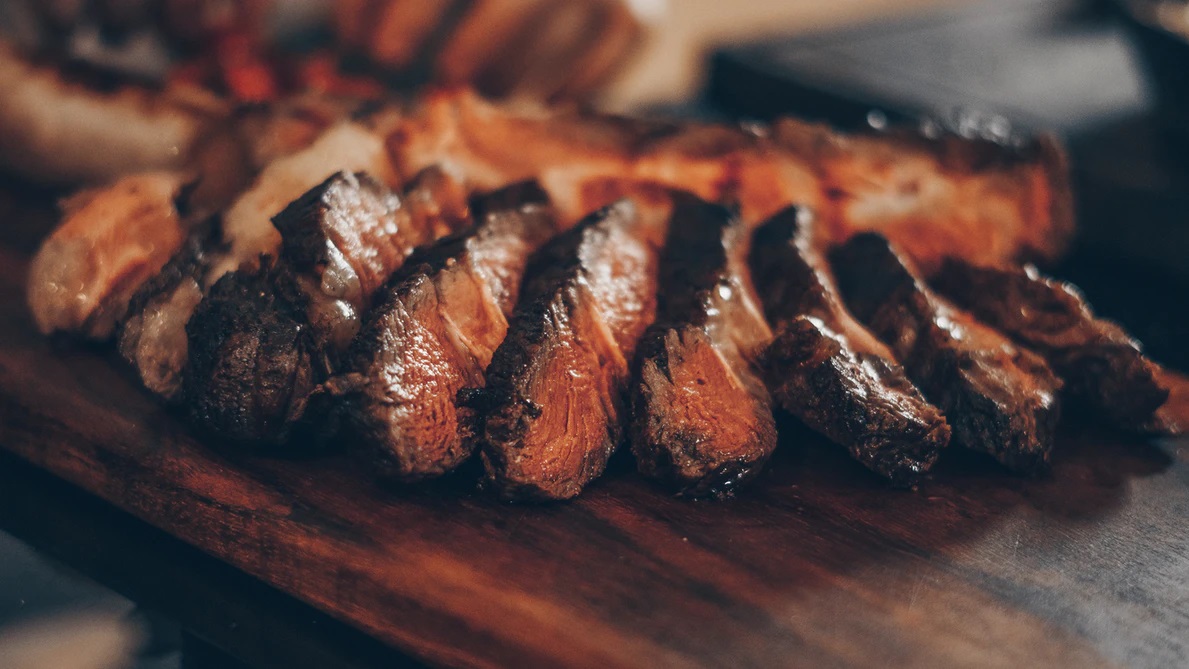 One of the most common questions about the carnivore diet is if it puts you in ketosis.

Ketosis has many benefits including:

So of course people are concerned.

What is the Carnivore Diet?

First off, what is the carnivore diet?

The carnivore diet is a high fat, high protein diet where you eat only animal products. Yes, that’s right. No more grains. No more sugar. And no more vegetables.

This may sound wacky at first. But there are many benefits of it including:

The carnivore diet took the world by storm when Shawn Baker appeared on the Joe Rogan podcast. He is an orthopedic surgeon and athlete. Dr. Baker is in his 50s and is absolutely ripped (I tried counting his abs but lost count at 1,421). He recently set two indoor rowing world records and he attributes his success to the carnivore diet.

Other prominent advocates include Mikhaila and Jordan Peterson, the clinical psychologist. Both have reversed lifelong autoimmune and mental health issues with the carnivore diet.

It’s also a variation of the Ketogenic diet as cutting out all carbohydrates will put you into ketosis.

Ketosis is the metabolic process of using fat, specifically ketones, as the primary source of energy instead of carbohydrates.

It’s a natural metabolic state that you evolved to spare muscle. Throughout evolution, there was not a grocery store nearby to have 6 meals a day. Your ancestors often went long periods without access to food (gasp, they even skipped breakfast, the “most important meal of the day!!”).

Your brain is very energy hungry. It lacks its own engine, thus requires a continuous supply of energy. For most people, this is glucose. Every single day a normal person’s brain consumes approximately 120g of glucose. This is 420kcal of energy which is almost 60% of all glucose utilization at rest .

However, at any given moment, your body only stores approximately 120g of glucose in your liver. Meaning, you’ve only got a day’s supply of glucose! Any longer fast than that and you’d be dead.

Your body has a couple ways of dealing with this challenge.

Even a very lean person that’s ~10% fat has upwards of 50,000 calories of fat on them at any given point. Yes…fat isn’t just a fashion statement. It’s stored so you can survive without food.

In response to fasting (or low glucose levels), insulin levels fall and your body pulls fat from storage. Many cells in your body, like your heart and brain, cannot use fatty acids directly for energy. So your body shuttles body fat to your liver to make into ketones (and actually fatty acids can be broken down into glucose too).

(P.S. How freaking cool is it that this is all happening behind the scenes?)

As you can see in this photo below, one of the main ketone bodies Beta Hydroxybutyrate rises dramatically into a fast as your blood glucose levels flatline. 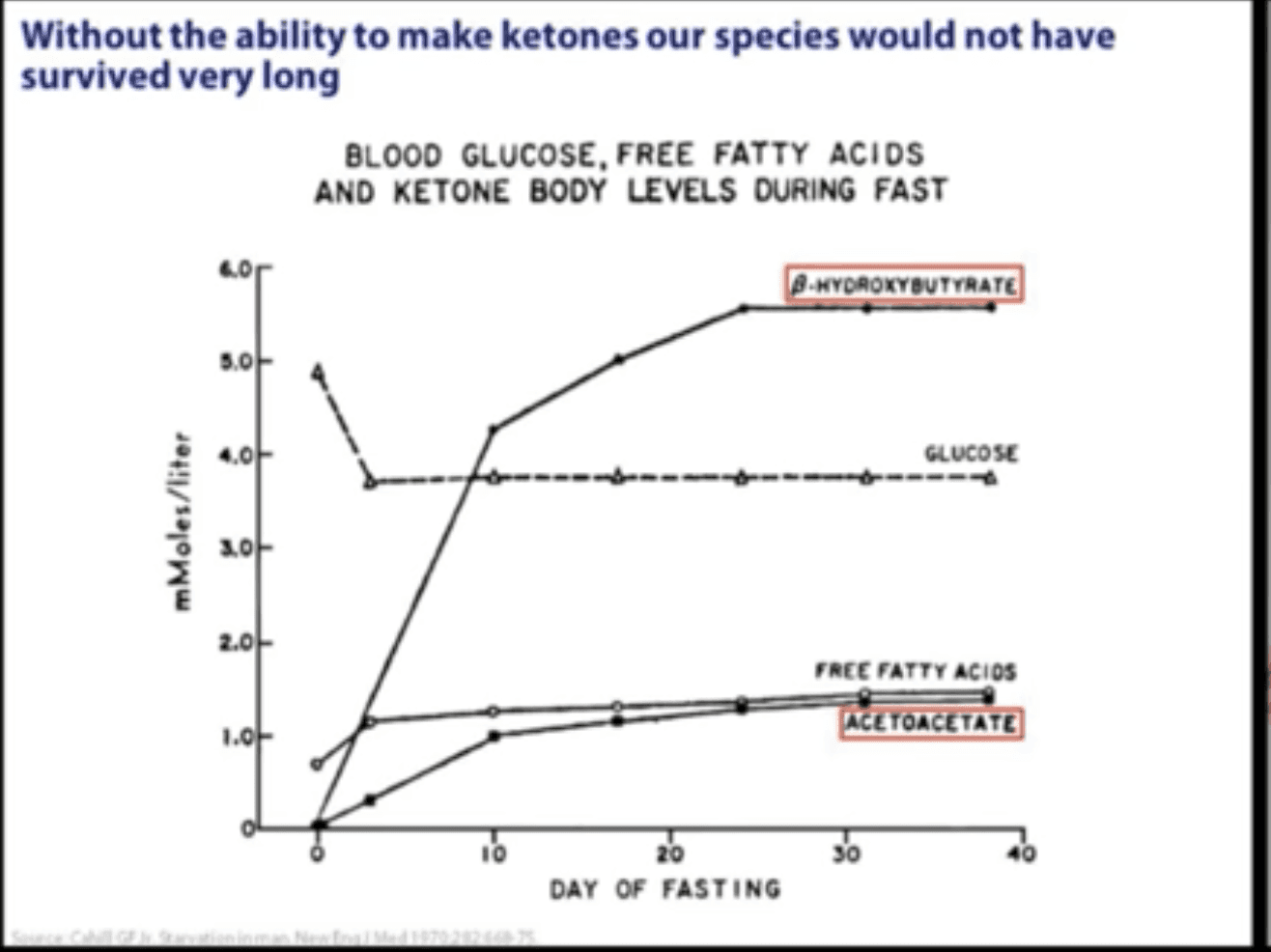 Without this metabolic trick, we would not be here today. In fact, despite your brain needing glucose to function, you don’t have to eat any glucose at all. Your body can synthesize it all on its own. If this isn’t magic, I don’t know what is.

This study showed that after three days of starvation, the brain will get 25% of its energy from ketones. During much longer term starvation this number can rise as high as 60% .

Ketosis has a number of benefits I’ll get into below,

Once your ketone levels reach a minimum of 0.50mmol/L of BHB, you’re considered to be in nutritional ketosis (according to Dr Steve Phinney).

The Benefits of Ketosis

Beta-hydroxybutyrate is a much better fuel than glucose. It has major benefits:

In fact, your brain and heart will preferentially use ketones when they’re available.

And in my opinion, this is a huge reason why mental health has deteriorated — most people are starving their brain of its favorite fuel.

So Does the Carnivore Diet Put You in Ketosis?

Do you need to starve yourself to go into ketosis? No, the benefit of the carnivore diet — a low carb variation of the ketogenic diet — is that you can still enter ketosis while providing your body with all the nutrients it needs (this is key!).

The carnivore diet gives you the benefits of fasting, without fasting.

As mentioned, your body stores around 120gm of glucose in the liver when stores are full and can make a good deal more from protein. If you’re eating a high carb diet, your body doesn’t ever need to go into ketosis because you’re eating all the glucose you need.

To go into ketosis, you need to eat fewer than 50g of carbs per day and sometimes as low as 20g (actually, some people can eat more carbs if they are extremely active, but lets leave those superstars out) .

When you restrict carbs to these levels, within 2-4 days you’ll usually be in ketosis.

Because carbohydrate intake is approximately zero on the carnivore diet, it will put you into ketosis. Most people’s levels tend to be > 0.5 mmol, but this depends on how much protein they’re eating.

Choosing between glucose and ketones is like deciding between rocket fuel and sludge that produces a massive amount of toxic waste.

What About Protein on the Carnivore Diet?

This is a highly debated topic within the ketogenic community. A properly formulated ketogenic diet is considered ~80% fat. But most people in the carnivore community are eating closer to 65% fat.

Does this hinder ketosis?

From my anecdotal experience and from working with others, it does.

I think of protein as more of a structural component than a fuel source. And when you exceed your protein needs, it strains your metabolic pathways (like your urea cycle).

This great presentation from Ben Bikman illustrated one mechanism whereby protein could reduce ketosis. If you’re starting the carnivore diet with already elevated levels of insulin and blood glucose, protein tends to increase insulin. And when insulin increases, fat burning and ketosis shuts off. Whereas Fat does not increase insulin and does increase glucagon, which increases ketosis.

I’ve tested this personally, and my ketone levels are much higher when I eat 80% fat and I feel much better.

With that being said, protein’s effect on ketosis seems to be highly individual. Many people can eat more protein and feel just fine.

Regardless, you will be getting many benefits from this way of eating. But in general, I recommend to experiment with macro ratios.

So does the carnivore diet put you in ketosis? The answer is an emphatic yes.

Ketosis has many benefits. The carnivore diet puts you into ketosis and this is one of the many reasons why it works so well.

This article was originally published at www.carnivoreaurelius.com.

Carnivore Aurelius is a nutrition and biochemistry expert who’s studied for over 5 years. He used the carnivore diet to cure IBS, rheumatoid arthritis and his acne. He’s passionate about distilling complex nutritional information down to actionable advice.